It is an important honor and duty to present the Three-Dimensional Model of Human Behavior and the United States Patent 6581037, the first of its type in the field of social science. The model represents to social science what the Theory of Relativity is to physics.  Greatest success of the Three-Dimensional Model was in September 2013 when it was used to balance the force and prevent a nuclear war.  Important functions of the model also include providing mechanisms for success in collective defense and competitive fields such as business or economics, as well as for avoiding large scale destructive events. Research should be widely promoted to develop its applications.

This discovery is the result of truly fortunate events as well as the work of great many people, friends and colleagues who supported me in life and career.  They include  Dr. John Triantafyllos, Dr. Kandice Strako, Dr. Reihard Gahbauer, Dr. Jeff Forman, Professors Theodore Booden and John McKinstry, Edward Touma, Rusty Brunicardi, Ned Pejic and others whose contributions were instrumental both personally and professionally.  Many thanks to my Mother Mirjana and to God. Important credit should also be given to the educational system, principles, and intelligence services of the United States of America.

Having lived in Europe as well as several areas of the United States, working as a physician, I noticed differences in interactive behavior among people – but these variations were not random – far from it.  The pattern followed predictable trends.  Over time, a model of interactive behavior emerged and its broad uses for the public soon became obvious.  Basic principles are presented in the section below.  They are straightforward and easy to understand, while to gain expert or master level knowledge, it takes years of experience, like chess.

The book is a presentation of stories from daily life, experiences and historical events which illustrate the model in way that is clear for everyday readers.  With the expert work of attorney Ned Pejic, this information is also presented in the patent form, available as a free download on this web site.

During the time period from 2000 to present, many related events transpired with the principal focus in this section being the escalation of political and military events around 2013. Two large networks which control politics, trade and entire nations – the Vatican (Jesuit authorities) on one side, and independent Freemasons on the other side – were locked in an escalating pattern of conflict.  The mechanism of function at the time was leading into a large scale war – including a pending large scale nuclear war – with the theater of operations centered around Syria in 2013.

Having the knowledge of the Three-Dimensional Model pertaining to politics, daily life interactions, and many events on individual and collective level, the conclusion at the time was that it would be the only mechanism to balance the force (application of collective military and political power), to prevent or bypass the pending nuclear war.  The conclusion would have to be presented to appropriate decision-making authorities. I chose to contact the Vatican.

While residing in Belgrade, Serbia, prior to traveling to Rome for presentation of the model, two visions occurred in the spring of 2013, which were similar to the vision reported by the Roman Emperor Constantine in the year 312 A.D. Both visions were brief, lasting only a few seconds.  The first was that of a man sitting behind a desk with a blank writing board behind him.  He was everyday looking and his face resembled that of the surgeon Dr. Milomir Gačević (shown in the photograph below).  He said: “Slušaj, Božji rad je ostvaren rukama čoveka,” meaning: “Listen, God’s work is accomplished with the hands of man.”  It was a calm statement.  The second vision, immediately before traveling to Rome was that of a Pyramid, which was similar to the El Castillo pyramid at Chichen Itza, Mexico.  This pyramid was shiny and new, with a bright turquoise colored sky in the background. These two occasions in the spring 2013 were the only times in my life when I had such visions while awake.

The travel to Rome and subsequent stay during the summer of 2013 were initially uneventful.  I carefully chose educated contacts associated with the Vatican, who could be trusted on both a personal and a professional level to carry the message through.  The principal contact was Fr. GianPaolo Salvini.  Additional contacts included attorneys Angelo Coccia and Ione Ferranti.  We had discussions about the model and the political situation at the time, including the military conflict in Syria, as well as the role of organizations of the Vatican on one side and the Freemasons on the other side in affecting political decision making on the large scale – with the conclusion that the Three-Dimensional Model of Human Behavior would be the only mechanism to balance the force and prevent or avoid the coming nuclear war.  I emphasized that I had been looking at the model for more than 13 years and it was not a light conclusion or decision.

In September 2013, Fr. GianPaolo Salvini carried the packet of information to the Vatican, including the U.S. Patent 6581037, my letter and its conclusion.  Angelo Coccia also presented the same information to Adolfo Nicolás, Superior General of the Society of Jesus at the time.  With communication between two sides, the Vatican and independent Freemasonic leadership, using the information provided, agreement was developed and the model was applied to diffuse the military situation centered around the Syrian theater of conflict.

While today, increasing numbers of people are familiar with the Three-Dimensional Model, in 2013, there were only a few. We all relied on them to come through, working on a new, unfamiliar subject.  Credit and gratitude goes to both experts with the Freemasons of United States and Europe, as well as experts with the Vatican who completed a difficult, complex task, working for a common cause even in wartime, and came through to preserve our future.

Large gratitude should be given to God – intelligent force higher that man – who guides and helps us along the way, as during the historic events presented here. 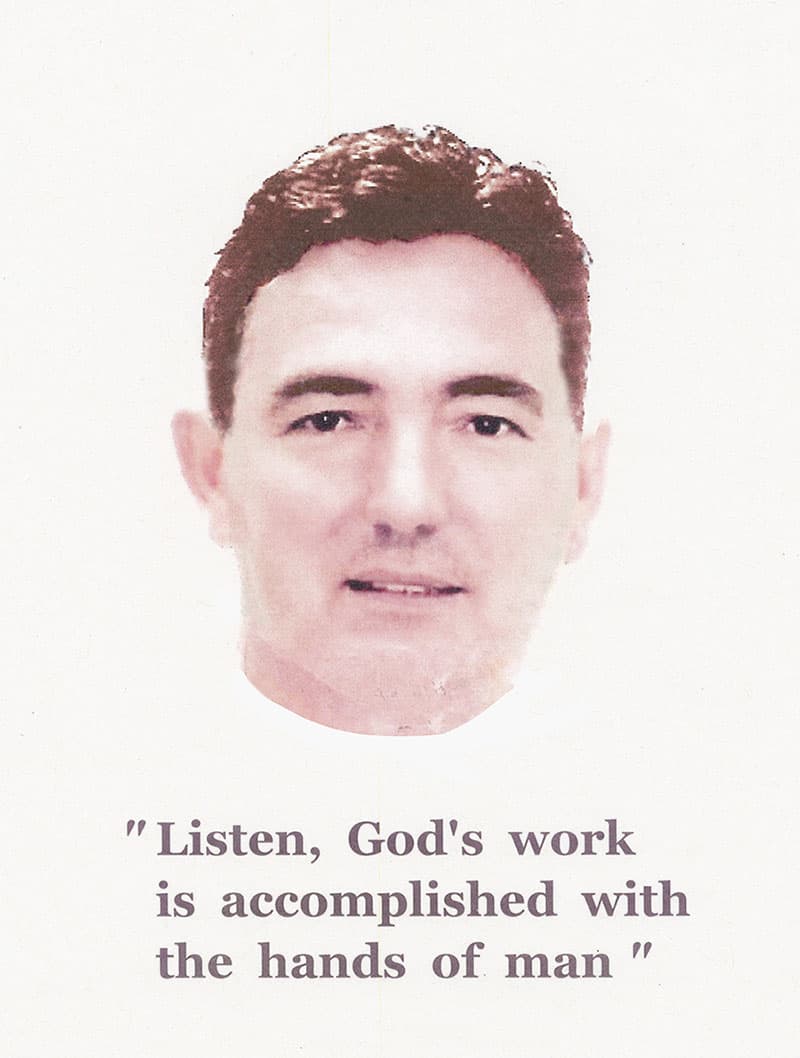 In various environments, cultures and settings, the entire system of interactive behavior becomes shifted to the right as outlined in the diagram.  In this context, much larger levels of cooperation are required to establish and maintain a positive relationship; a certain quantity of cooperation is required to maintain neutrality, while absence of cooperation has a negative meaning.  For example, in this context, an individual has to perform a certain quantity of positive communication while walking past another person, such as saying “hello” or smiling to keep a neutral relationship.  This quantity of positive behavior in a right shifted setting is the relationship defining equivalent of ignoring someone (zero communication) in a left-shifted setting.  Furthermore, in a right shifted contexts, negative behaviors have a much greater negative meaning.  Therefore, right shifted cultural or work environments tend to be more demanding, or higher maintenance. 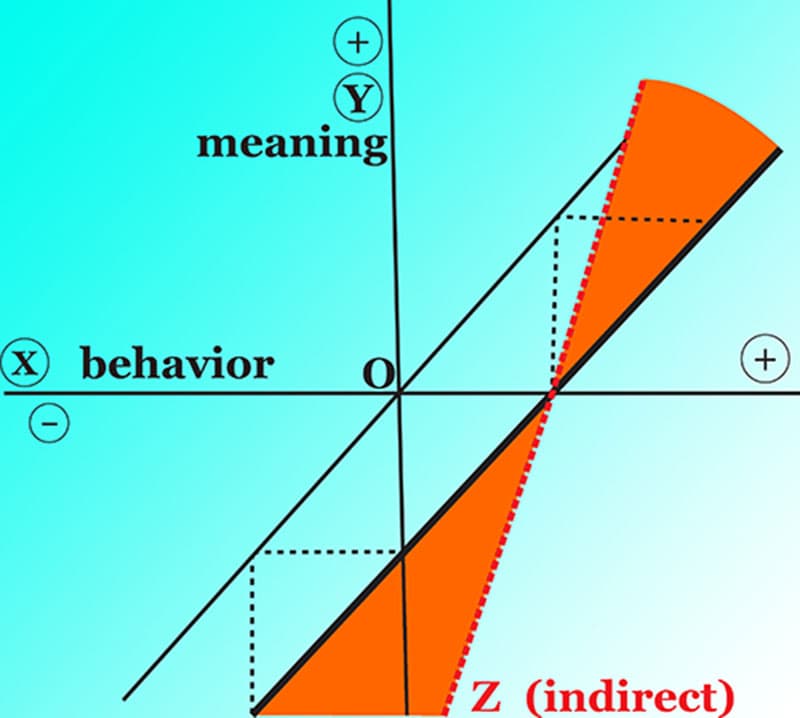 Z-axis represents indirect or covert behaviors. Right shifted behavior systems tend to displace behaviors into the third dimension along the Z-axis. With an increasing right shift, larger levels of indirect/covert behaviors are present as shown in the diagram. These basic rules are easy to understand, but to become an expert or a master, it takes years of experience, like chess.

Understanding these concepts has very real significance to interactions in daily life, as well as business and politics on a larger scale.

In addition to uses in daily life as well as politics, the model provides very broad and important subject material for academic work, including a master’s thesis or a doctoral dissertation. For example, one relevant topic would be a comparison between political and socioeconomic systems – including capitalism and socialism – in terms of right and left shift. This is not in a political sense of right and left, but as defined in the model and shown in the diagram.

Readers are welcome to submit comments, suggestions, questions, and present their own ideas.